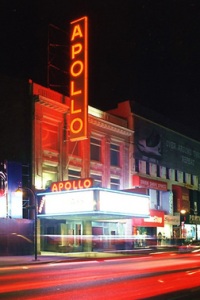 NEW YORK (AP) – New York City’s Apollo Theater launched the careers of such legends as Ella Fitzgerald. It was also the site of memorial services for Michael Jackson and James Brown, and Barack Obama’s 2007 campaign rally.

A new exhibition at the Museum of the City of New York will highlight these and other seminal events of the 75-year-old Harlem landmark.

The exhibit, “Ain’t Nothing Like the Real Thing,” will run from Feb. 8 to May 1.

It also will include letters from Adam Clayton Powell and Martin Luther King Jr.

The show has been organized by the Apollo and the Smithsonian’s National Museum of African American History and Culture.

Like Loading...
Categories: Events & Activities | Tags: activities in Harlem, apollo theater, barak obama, events in harlem, Harlem, james brown, michael jackson, Museum of the City of New York, Smithsonian's National Museum of African American History and Culture, things to do in Harlem, things to do in manhattan | Leave a comment