Inside the Newly Opened Aloft Harlem 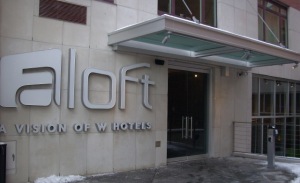 The Aloft Hotel in Harlem has been open and welcoming guests now for just over a month, but last Friday they held the official grand opening when the politicians and corporate people put on their shiniest ties and mug for the cameras. The guest star was Congressman Charles Rangel, who actually once worked as a desk clerk in the Hotel Theresa, a former hospitality and historical icon in Harlem that closed at the end of the 1960s.