1970s Harlem Brought Back to Life at Studio Museum 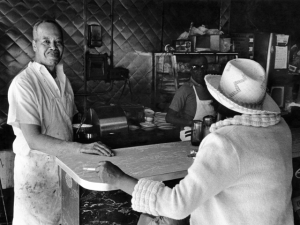 HARLEM — The photographs — proud men and women frozen in time — reveal a Harlem that many people can’t imagine.

A new exhibition at the Studio Museum in Harlem by photographer Dawoud Bey and titled “Harlem, USA” showcases an intimate, black and white portrait of black life in the historic neighborhood in the 1970s — a daily life that was rarely seen in the media.

One of Bey’s photos, which were taken in Harlem from 1975 to 1979, shows a well dressed older black man wearing a top hat and a barber posing proudly in front of his chair. In another, a woman cradles her baby and in another a boy poses in front of a now-demolished movie theater.

“It was one of those moments when images of African-Americans were not always positive,” said Lauren Haynes, assistant curator at the Studio Museum of Harlem. “They capture the subjects in every day moments.”

Bey, who had family members who lived in Harlem, was connected to the neighborhood. His mother and father met at church in Harlem. Bey’s interest in photography was sparked as a teenager after seeing the photographs of famed Harlem photographer James VanDerZee at his 1969 “Harlem on My Mind” exhibit at the Metropolitan Museum of Art.

Bey combined his twin interests when he began strolling the streets of Harlem. The Studio Museum in Harlem first displayed Bey’s photographs in his first museum exhibit in 1979.

Haynes said Bey has continued a relationship with the museum during the past three decades. He now teaches at Columbia College of Chicago but recently worked at the museum’s “Expanding Walls” program for teenagers.

“There’s a timeless quality about a lot of the images,” said Haynes. “You will still find a lot of scenes like this in Harlem but the faces have changed.”

The Studio Museum in Harlem is located at 144 West 125th Street. Bey’s exhibit will be on display through March 13.