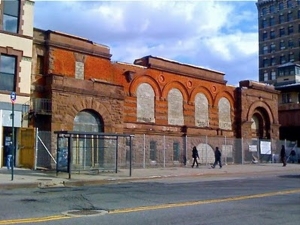 The Corn Exchange Building at Park Avenue and East 125th Street is a shadow of its former self, having been sliced from six stories to a two-story high stub because of its decrepit condition.

Now, officials at the city’s Economic Development Corporation want to hear proposals on how to redevelop the landmarked structure, which was built in 1889.

“The purpose is to understand what the interest is,” said Kyle Sklerov, a spokesperson for EDC. “We think it is an important site because it is located in the heart of Harlem’s commercial corridor and it has been underutilized for a long time.”

The building sits on a 4,300-square-foot lot and is zoned for both commercial and residential uses. The building was designed by architects Lamb & Rich in the Queen Anne and “Romanesque Revival” styles. It was originally constructed for Mount Morris Bank, which was absorbed by the Corn Exchange Bank in 1913, according to reports.
The building eventually fell into the hands of the city due to tax foreclosure in the late 1970s.

Christopher London, an architectural historian and board member of the Historic Districts Council, called the building the finest example of architecture along 125th Street. He first began to admire the building a quarter century ago when it was still intact.

Read the full article from DNAinfo.com