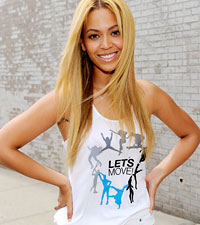 NEW YORK (AP) — Students at a New York City public school working out to a Beyonce song got a big surprise when the superstar walked in and joined them.

About 85 students at P.S. 161 in Harlem were in the middle of a choreographed routine Tuesday to a song adapted from Beyonce’s hit “Get Me Bodied” when the singer arrived.

The singer joined in wearing stiletto heels and a T-shirt emblazoned with “Let’s Move.”

Thirteen-year-old Aisha Collier gushed “she’s so beautiful.” She told the New York Post she messed up a little when Beyonce first arrived but then got back into it and continued to dance and have fun.