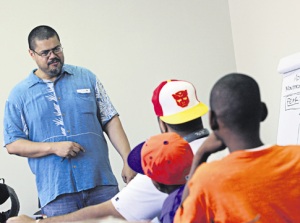 At the Countee Cullen Library on W. 136th St. in Harlem, Ivan Velez Jr., 49, steps away from his easel and addresses his class, a group of seven kids with and markers in hand.

The topic of today’s workshop is monsters — why we fear them and why we need them.

“Why do people make stories about monsters?” he asks.

Monster stories, he says, use fear to control behavior. The bogeyman gets kids to stay in bed at night. La Llorona keeps kids away from the river.

The stories, he says, also help people cope with adversity by raising a crisis to the status of myth.

“In Tokyo, they have these natural disasters, like earthquakes and tsunamis,” he says. “They have these monsters as a way of dealing with it.”

It’s a concept to which Velez can relate.

As a closeted teen growing up in the South Bronx of the 1960s, the world of monsters and heroes was Velez’s best defense.

“It wasn’t safe to talk about certain things. In that culture, you didn’t mention your sexual or ientation. The shame was very strong,” he says.

He sought refuge in his imagination, in the characters he read in comic books — Archie, Superman and the X-Men — and the action stars he watched in kung fu movies.

“It was a way to escape the real world,” he says.

For Velez, teaching at libraries and other education centers is his way of giving back to another generation of artists discovering a new comic culture, providing the guidance they need to create their voices.