Stevie Wonder Inducted into the Apollo Legends Hall of Fame 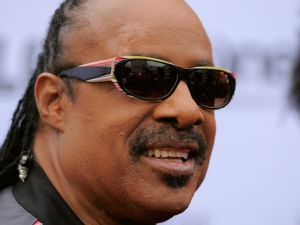 The singer was lauded as a great musician and humanitarian at the historic performance space.

Stevie Wonder was inducted into the Apollo Legends Hall of Fame in a star-studded event capped by a jam session that brought together stars from the world of hip-hop, jazz, pop and gospel music.

“I thank God for love and I thank God for song,” Wonder said Monday during his acceptance speech after singing a short duet of his well-known song “For Once in My Life” with Tony Bennett.

Attendees said Wonder’s music provided a soundtrack for the nation and even inspired social change.

Artists like Chick Corea, Melanie Fiona, Yolanda Adams and Take 6 lauded Wonder by performing some of his greatest hits. Doug E. Fresh joined Wonder for a beat box version of “All I Do,” along with Questlove, drummer for The Roots.

“What took ’em so long?” director Spike Lee said about Wonder’s induction. “A lot of time we wait until people are dead. Let’s honor the greats while they’re still alive and can enjoy it.”
Wonder’s fellow Motown singer Martha Reeves agreed.

“This awards ceremony is just in time. We’ve lost a lot,” she said.
That’s why Jonelle Procope, president and CEO of the Apollo Theater, said she was moving to honor as many music legends as possible. Last year, Gladys Knight’s star on the Apollo Walk of Fame was revelead.

“I like the idea of recognizing them while they’re still alive,” she said.

Not that Wonder is going anywhere. Wonder said he was still a “young 61” before leading an all-star jam session of his songs that had the crowd on its feet for much of the night.

“He inspired me to be a better artist,” said Yolanda Adams who performed a soulful version of “Love in Need of Love.” “There are a lot of people who do one thing but they don’t do everything. This man can do everything.”

That includes inspiring the nation, said the Rev. Al Sharpton, noting that many commercial artists shied away from message songs, but not Wonder.

“He single-handedly got the whole nation to talk about Martin Luther King’s birthday,” Sharpton said of the song “Happy Birthday” that Wonder recorded to make the case for a national holiday for the slain civil rights leader.

“When Stevie came out with that song he changed the whole mood of America. He gave us the first federal holiday for a person of color in this country,” Sharpton added.